In geopolitical terms – the big trifecta is Afghanistan, Pakistan, and India (that’s the yellow, dark-yellow, and the grey band just to the right of Iran).

While the occasional geopolitical manoeuvres in the dark make for a great Bond movie, we have an obligation to dig a little deeper. First step on our adventure is to zoom in on the Afghan/Pakistan border where that orange band in the middle (see illustration below) is Taliban territory.

Things get more interesting when we throw in details of the ethnic, cultural, family, history, loyalty thing – and in the following map we should be cognisant of the fact that geopolitical boundaries don’t take centre stage (after all – the border between Pakistan and Afghanistan was nothing more than an arbitrary 19th century British colonial construct). 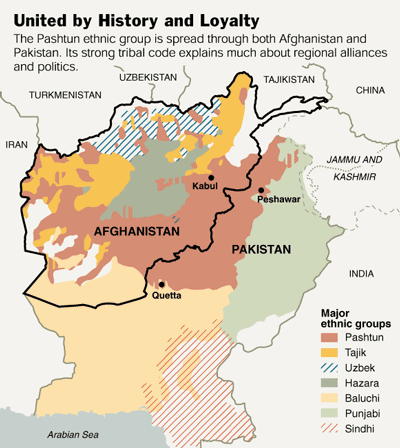 Just for reference – that big brown blob in the previous illustration is the Pashtun ethnic population. The following map drills down and identifies the principal regions at ground zero.

But lets zoom out again and factor into this equation that discussion about the relationship (and/or conflict) between Afghanistan and Pakistan that is of direct interest to their neighbour Iran (the big bugger over on the left). After all, Iran has many of the same tribal problems that face the fledgling Afghanistan administration (and an outbreak of secular testosterone in Afghanistan is a potential problem in the making for Iran). Let’s also take into account that big chunks of Afghanistan could be argued to be more properly part and parcel of Pakistan (which would go a long way towards explaining some of the accusations of Pakistan/Taliban loyalty). Equally, when we talk about Pakistan and India (the big bugger over on the right) there is the inevitable engagement of China (the really big bugger over on the far far right) as a player with more than a passing interest. And let’s not even get into the parallel universe of the Kashmir equation.

Thing is, a failed Afghanistan state creates stress for Pakistan and stress for Pakistan creates opportunity for India, an India/Pakistan conflict plays into the hands of China, and at the end of the day a bunch of nation states (US, Britain, France, Germany, Russia, and Australia) just aren’t ready for that reality just yet. But what ties this all together is that none of the players want to see a united secular solution.

And for better or worse – what if this conflict may be our best hope for peace in our time? Why? Simply because an alignment of common interests between the principal players in this equation. That the simple thing of an alignment just may be a greater good than the atrocities that have and will be committed in the sustainment of this transient moment.

Pakistan is swiftly drifting towards an all out civil war
Abdus Sattar Ghazali, 28 October, 2009

Good to see Roos No1 son is not short of a couple of red backs.
Is that where Catrinas BBQ is, the house warming?

Secluded at the end of a private drive-way, the home is surrounded by sprawling North East gardens, sunny terraces, tennis court and a swimming pool. Superb Georgian architecture and 3.6 metre ceilings exude grandeur and elegance, while also offering an abundance of space for family living and entertaining on a lavish scale.

602
gaffhook
Sheesh. $21 mill for that overblown pile of rubbish.
I guess Lachy has inherited his father’s genes when it comes to overpaying for flashy trophies. (Like….. say…. WSJ)

When the property bubble finally bursts….I’ll enjoy the smell of schadenfreude in the morning. 👿

Now, Chris back to your clip for the magic moment……

Reid’s political campaign for re-election has received a major boost, after the front-runner GOP challenger recently laughed off an attempt on Reid’s life back in 1981. Sue Lowden, former Nevada Republican Party Chairwoman, joked about the assassination attempt that occurred when Reid was chairman of the state Gaming Control Board. An explosive device that had been placed under the hood of Reid’s car failed to ignite. Lowden’s bizarre jesting—which she has subsequently denied—has all but eliminated her as a serious contender in the 2010 senate race.

At the time of the botched murder, Lowden was a news reporter at KLAS TV, the CBS affiliate in Las Vegas. She was a close friend of the city’s preeminent investigative reporter covering the mob-related violence then pervading the city, and also was dating her future husband—a casino owner. In a recent interview, Lowden claimed never to have heard about the bomb. “If Lowden hadn’t been a television news reporter then, her memory lapse would have been understandable,” wrote Las Vegas Review Journal columnist John L. Smith. “If she weren’t married to casino man Paul Lowden…who climbed the casino ranks at a time…[when casino] executives were getting blown up, indicted, and running for their lives.”

continued on the Daily Beast

Oh! According to EC they lost the health care bill. 😈

604
Paddy
And the slime ball that Begat him is out here at the moment dropping dog turds everywhere and making out he is trying not to offend anyone.
He keeps saying “we” and “us” as if he is still an Oz but he should really shut his big fucken mouth and go back home to the US.

Olberman is right on to him though and maybe he is out here trying to distract from his most recent award in the US.

Well, Chris, there’s still the little matter of Joey The Rat and the Senate. Lots of jostling to go on yet. But I’m both delighted and surprised it passed Congress.

I think We The People will be plenty agro if they now have Healthcare snatched away from them or diluted to swill by the Senate. A lot of decent tax-paying Americans are expecting their President will apply gentle persuasion where necessary. As he indeed did on this historic occasion.

My understanding is that there are at least two more additional votes before anything touches Obama’s desk. First of the Senate have to vote on their version of a Health Care bill and then comes reconciliation of the House bill with said Senate bill which in principal results in a new reconciled bill which is voted upon by both House and Senate.

KatieLou – have I got it right?

608
I saw those references to the divine Rupert Gaffy.
I’m also glad to see that Kev has picked up the pace about slagging off his denialist minions. Let’s face it, the Bolter and Co are really in need a dose of the rude pundit up the fundament! 👿

Meanwhile, the debate on health care in the US is bubbling along nicely. (Unless, of course you want/need an abortion.)
I watched a clip on cspan, of the right to (someone else’s) life nutters in the congress. Spouting hate and bullshit about how they’d saved so many lives with the Stupak amendment.
I damn near threw a shoe at the TV.
It’s going to be a mighty tough fight in the senate, if the Dems want to remove that piece of hate crime masquerading as legislation.

In better news, one of my favourite bloggers is back online and just as funny as ever.
Helen is the one who coined that immortal line….

Michele Bachmann’s wheel is still spinning, but the hamster is dead.

Sarah Palin wrote a book. It was co-authored by a million monkeys on a million typewriters.

I will be cialis dosage person suffering from diabetes additionally long time smoke enthusiast Buying Cialis Brand who leave a few years buy sovaldi previously. Sexual hasnt ended up right for some time. Cost of Sovaldi in Mexico Acquired some sort of prescription regarding 20mg dividers. Find about the inside side effects along with thought we would try out reducing the supplement within thirds. Experienced sexual 3 several hours later on. Wonderful! Including being something like 20 all Generic Cialis over again. Very small throbbing headache a great hours the next day. Is very much functioning fine for the next time. Buy Cialis